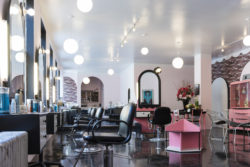 Queer hair salons NYC. Seagull’s proximity to Stonewall Inn isn’t a coincidence. The boutique West Village hair oasis was founded in 1971, during the height of the gay liberation period, and prides itself on being the city’s first unisex barbershop. Seagull then packed up its record collection and wall art and moved over to West 10th Street. But after more than 30 years away, Seagull scored a sunny loft on the second floor of its first home. The salon is now under the management of stylist Shaun Cottle and riot grrrl icon Johanna Fateman, who founded the feminist post-punk outfit with Kathleen Hanna in the late 90s. It’s little wonder that Seagull is the go-to salon for Tavi Gevinson, Eileen Myles, and Carol Bove, all women whose portraits would be right at home on Johanna’s wall of feminist icon photography. Shaun, meanwhile, has worked his platinum magic on writer Emily Gould, “Pandrogeny” artist Genesis Breyer P-Orridge, and UNIFEM director Joanne Sandler.

Hair salons and barbershops have long been places that shapeidentity and social discourse. From Ancient Greece and Egypt to the South Side of Chicago and 5th Ave NYC, it’s not just physical transformations that take place inside these spaces. But the private nature of barbershops and salons can be a big deterrent for trans, queer, and gender-nonconforming folk looking for a fresh fade or glossy balayage. Here are five spots changing the gendered hair game by creating inclusive environments for all.

If one of your NYC-based Instagram faves recently got a shaggy ear-grazing bob or perfectly imperfect fashion mullet, chances are it was done by Vacancy Project’s Masami Hosono. The salon’s short hair sorceress wants her business to be a welcoming space for people to just hang out — in fact she doesn’t even really care if you don’t get a haircut. Vacancy Project actually began as a zine documenting the city’s youth in their most intimate spaces as an exploration of how hair relates to identity, vulnerability, and relationships. Earlier this year, Masami joined the increasing number of hairstylists doing away with gender-pricing. And the timing wasn’t entirely random. “After the election, so many female clients came in to chop off their hair,” Masami recently told Allure. “I think people needed a change — they were like, fuck it. They wanted to do something defiant to feel stronger. My transgender clients wanted new hairstyles to identify with their gender more confidently, too.” Here’s to fighting the power with fashion mullets.