Radical feminist author Andrea Dworkin was a caricature of misandrist extremism in the popular imagination and a polarizing figure within the women’s movement, infamous for her antipornography stance and her role in the feminist sex wars of the 1980s. She still looms large in feminist demands for sexual freedom, evoked as a censorial demagogue, more than a decade after her death. Among the very first writers to use her own experiences of rape and battery in a revolutionary analysis of male supremacy, Dworkin was a philosopher outside and against the academy who wrote with a singular, apocalyptic urgency. 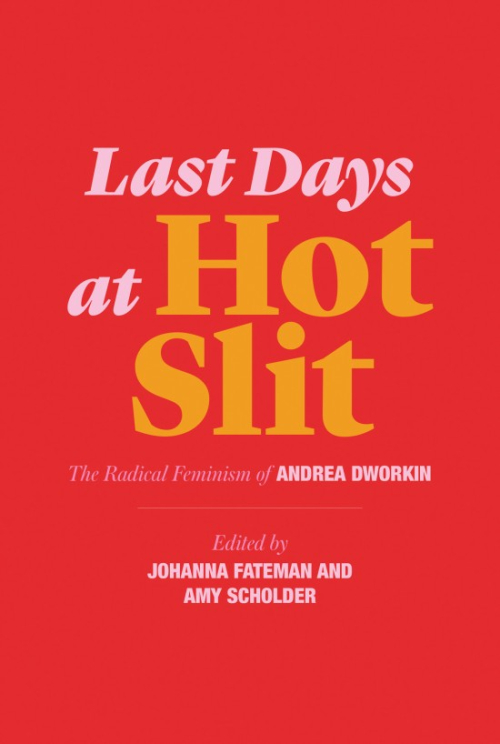 Last Days at Hot Slit brings together selections from Dworkin’s work, both fiction and nonfiction, with the aim of putting the contentious positions she’s best known for in dialogue with her literary oeuvre. The collection charts her path from the militant primer Woman Hating (1974), to the formally complex polemics of Pornography (1979) and Intercourse (1987) and the raw experimentalism of her final novel Mercy (1990). It also includes “Goodbye to All This” (1983), a scathing chapter from an unpublished manuscript that calls out her feminist adversaries, and “My Suicide” (1999), a despairing long-form essay found on her hard drive after her death in 2005.

Two editors join forces to produce an anthology of works by a controversial second-wave feminist.

Andrea Dworkin (1946-2005) achieved notoriety in the 1980s as “an iconic figure of so-called anti-sex feminism.” Musician and art critic Fateman and Lambda Literary board president Scholder attempt to offer a complete portrait of Dworkin’s oeuvre by bringing together selections from both her famous theoretical and lesser-known literary works. The editors begin with essays taken from Woman Hating (1974). Each piece reveals Dworkin’s core concerns that “the nuclear family and ritualized sexual behavior imprison [women] in roles and forms which are degrading to [them]” and that manhood is predicated on the enactment of (sexual) violence against women. Selections from Our Blood (1976) show Dworkin in dialogue with other second-wave feminists and in particular, her fellow militants, Kate Millett and Shulamith Firestone. Those pieces drawn from Pornography (1981) find Dworkin theorizing that pornography is a savage “genre” concerned with depicting all aspects of “male power.” Fateman and Scholder also gather excerpts from Intercourse(1987), a book concerned with “the sexed world of dominance and submission.” Although Dworkin was a published poet, the editors focus on her prose efforts. They include autobiographical writings such as “My Life as a Writer” (1995) and “My Suicide” (1999), a devastating unpublished account of how Dworkin was drugged and raped in a Paris hotel. The editors also offer selections from two fictional works, Ice and Fire (1986) and Mercy (1991), which portray protagonists who suffer horrific personal injustice at the hands of men and patriarchal society. Fateman and Scholder’s anthology is useful as a primer on works by a figure consigned to the radical fringe of feminist discourse, but its no-holds-barred accounts of misogynistic brutality and uncensored expressions of female rage do not make it a book for the faint of heart.

Intense reading most likely to appeal to radical feminist scholars.