This article about the history of 224 West 4th Street, where our hair salon Seagull currently resides was once home to The Greenwich Village Theatre. Burt Savoy, one of the first female impersonators in the city got his start there, as well as Mae West. Seagull is really excited to be part of the building, especially because it was Seagull’s very first home for one year in 1971 before moving to our old location on West 10th street. So our move last November was like a giant, queer migration home. Enjoy: 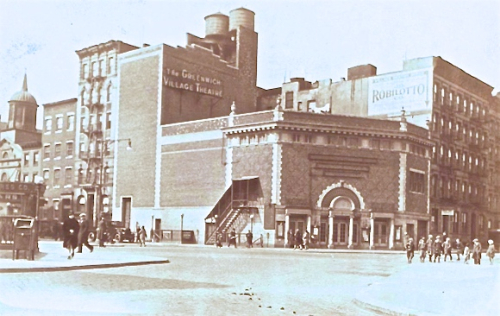 It was the summer of 1922 and Mae West was about to celebrate her 29th birthday. Hungry for stardom and going nowhere in vaudeville, Mae bit the bait: a chance to star in a play The Ginger Box that could make her a star. According to biographer Emily Wortis Leider, The Ginger Box served up wall-to-wall Mae West. In addition to featuring her as Circe, turning her lovers into swine, it presented Mae West as a Broadway vamp (played to Harry Richman’s victim), Mae West singing “I want a Cave Man,” Mae West clowning Tommy Gray’s “I’m a Night School Teacher,” and torching a song whose regretful tone she would later rule out: “Sorry I Made You Cry.” Major troubles were afoot, however, and revealed themselves during a two-performance try-out in Connecticut. Also, the flam-flam producer Edward Perkins was perpetually short of funds and vanished, leaving unpaid debts and I-owe-you notes to his cast. Ginger Revue Now a Pepless Stew as Promoter Disappears announced the New York Daily News [August 13, 1922]. Thirteen Equity actors sued Perkins to recover their salaries — but not Mae, who was to have received a percentage of the box office. The Greenwich Village Theatre was made famous by female impersonator Bert Savoy who performed in the acclaimed “Greenwich Village Follies” there, an annual review that was so popular that it moved to Broadway. Located until 1930 on the western side of Seventh Avenue South where Christopher Street kisses West Fourth, it faced Sheridan Square. During the 1920s, the outstanding success of this cultural outpost put Sheridan Square on the map as a mecca for avant-garde entertainment. A fierce financial beast – the Wall Street crash in 1929 – killed this beauty.