Julianne Escobedo Shepherd along with other Jezebel staffers talk about their most regrettable summer reinventions! 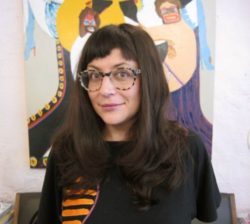 In around 2012, my glorious and genius hairstylist Shaun Surething and I got to reminiscing about the 1990s, as we often do, and at some point we decided it would be a good idea for me to shave an undercut into my long, dark brown hair, and bleach it blonde underneath, which complimented my baby bangs, which were so extreme in their asymmetry that part of them were shaved into my hairline. It looked really cool in the Tumblr era, but I’m not sure I would do it again. (Actually… maybe I’ll do it again.)

Last summer, I got a bob and decided I would also dye it blonde. Why, I’m not entirely sure. It was super cute at first, but then it started to grow out and I was plagued with another decision: touch-up or grow out? I never really decided, letting several months pass telling myself I was totally find with this intermediate style, and then finally I went with a third option: dye it back to my natural color, which is basically black. Why did I go blonde? I thought it’d be fun. Did I actually have more fun? Hard to say. In the end, I defaulted back to the real me—but it’s really just to buy myself more time to decide if I want to go blonde again… They say you’ll repeat the same mistakes over and over until you learn your lesson, and I view those who have in high regard.

I can’t think of a time in high school I wasn’t reinventing myself, to myself (I’m not sure how much others noticed although I was always curious). Once I came back from summer with a wardrobe consisting only of high-waisted stovepipe jeans; some had buckles, one had pinstripes, it was a suitable mess. I was obsessed with fashion designers, models, ripping off runway looks on Beacon’s Closet excursions, and had started brashly filling up sketchbooks with my “ideas.” The summer of the waist-surpassing pants I’d interned for a fashion designer named Judi Rosen who used to have a little store on Kenmare street, where I once sold a pair of sunglasses to a Victoria’s Secret model. My dad’s then-girlfriend, who seemed to me the apotheosis of cool in that she was a real estate agent and, by her own account, on speaking terms with Betsey Johnson, hooked me up with the job. I also worked a bit in Rosen’s studio on Crosby with a woman named Desirée who represented the other pinnacle of chic: bangs, a boyfriend. I was paid in skinny jeans and a new style of low self-esteem.

I can’t remember which grade in high school this was, but one fall semester I came back from summer wearing a lot of Guess t-shirts and had brand new Timberlands on my feet, which was the go-to outfit at one point of ~cool~ girls in Queens. I thought I was fancy, but I don’t think anyone noticed.